Is Any Publicity Good Publicity?

The late, great Johnny Carson once described the shortest period of time that can be measured as the time from when the traffic light turns green, to when the guy behind you beeps. Today, though, Johnny might amend that to the time from when a pop-up ad appears on your device to when you click on the little “X” in the corner.

So, how often do you pay attention to the advertising you see? Could you describe the last ad you saw? Could you even identify an ad you thought was particularly compelling? Could you name the last time an ad actually drove you to action – be it to lend your support to some sort of advocacy or to make a purchase decision?

I’m guessing your relationship with advertising is passive at best – and that’s not surprising. We’re bombarded with ads. One fine day, for example, Ron Marshall of Red Crow Marketing in Springfield, Missouri, counted seeing 487 ad messages before he finished breakfast. Experts estimate we see up to 5,000 ads every day. It’s overwhelming, so experts also contend that, for the sake of sanity, our brains program themselves to ignore ads. 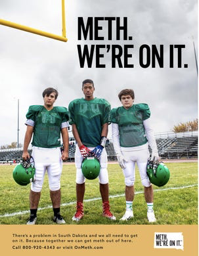 So, how to break through? Few people have chosen to ignore the state of South Dakota’s just-unveiled “Meth. We’re On It.” campaign, for which it paid a Minneapolis ad agency nearly $500,000 to develop. Reactions from the ad community and others on social media were either praising the braveness to approve it or were devastating from others critical of the approach.

Is this an epic failure that somehow survived hours and hours of review and countless approvals? Or is it a stroke of genius?

A simple review of the ads themselves provides ample fodder for anyone inclined to dismiss the campaign as a gargantuan blunder. (Please note especially in the lower right corner of this ad, the “Meth. We’re On It” copy blazoned over an image of the state, from which one could reasonably conclude that every one of South Dakota’s 882,000 residents is addicted to methamphetamine.)

The “stroke of genius” argument gets a bit more interesting. If the goal was to raise awareness of the methamphetamine problem in South Dakota, this agency took the kick-off from 10 yards behind the goal line and ran it the length of the field. A simple Google search of “South Dakota Meth” shows articles about the campaign from several top-shelf publications, including The Washington Post, The New York Times and The Los Angeles Times.

The “raise awareness” angle is the one Governor Kristi Noem is taking to describe the campaign’s impact.

“South Dakota’s anti-meth campaign launch is sparking conversations around the state and the country,” she said. “The mission of the campaign is to raise awareness — to get people talking about how they can be part of the solution and not just the problem. It is working.”

It’s tough to argue with that; however, “raising awareness” can be accomplished with just about any slogan and a big-enough ad budget – and accomplished without humiliating an entire state. A more strategic question is how will South Dakota measure the impact to determine if “boldness” lead to more people getting help. While the agency will likely submit the campaign for awards, will South Dakota taxpayers see a real return on the investment.

So, what’s next for this campaign? We hope the fine ad folks in Minneapolis are developing a plan to support this effort with strategic ideas to reach people, share facts, and connect people who need help with the resources that are available.  An effective follow up is about the only possible way they can save face. One suggestion might be to shift focus from “raising awareness” to an effort that can demonstrate it’s been measurably effective in reducing methamphetamine addiction.

Brands as BFFs – and risks and rewards